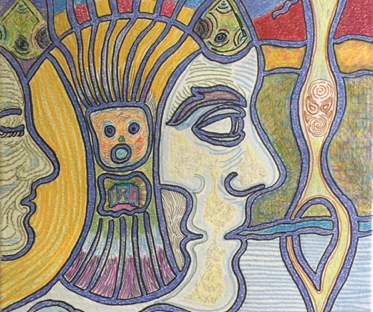 Last week, while I was home with a cold, I began experimenting with an old water soluble crayon set I have. I find painting/drawing on an easel a lot easier physically than printmaking with the pain of repetitive strain I’ve acquired from lino and woodcutting. So, I’ll return to the latest print after a break.

For the drawing below, all I started with was a desire to draw a human profile. The rest developed from there. I mostly used the crayons dry and combined some pigment markers with them. The drawing has a controlled feeling to me because of the outlines throughout. I was interested in experimenting with layers of colour and texture. At times when I was unhappy with the results and redid them, I managed not to destroy the image in an attack of self-criticism. I find making artwork is a dance between creation and destruction. There’s a line between honestly facing mistakes and shredding myself for making them. Now that the piece is finished, I think I’ll try making further works using this drawing as a starting point. I want to practice a looser look, perhaps bringing out the watercolour properties of the crayons. As for the content, for me it reflects some of the different voices or faces within a person, coupled with strange sci-fi or unconscious looking elements.

The next experiment I did pretty quickly, as a reaction to the first one. I cut up part of an earlier crayon watercolour and adhered it to a sheet that I loosely marked in black. I like the feel of this one. There’s the contrast between black, white and colour. And there’s the contrast of the controlled edges of the cut outs with the loose scribbles of both the black crayon and the colours within the shapes themselves. Perhaps this collage technique is one I can develop. It could stand alone or be part of larger works.

You can also see my work at artsofmay.etsy.com