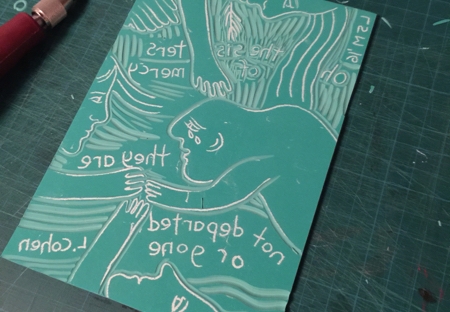 After Leonard Cohen died, I remembered an interview I heard a few years ago with the Iranian Canadian journalist, Maziar Bahari. He had been imprisoned in Iran and falsely accused of being a spy. He was subjected to torture and didn’t know if he would live or die. One night, he had a dream that brought to mind Leonard Cohen’s song, The Sisters of Mercy. Though he had never been a fan of Cohen’s  music, he felt that song had a major role in saving his life. Through it, he found a place within himself that his captors and torturers could not destroy.

Part of that interview was replayed this fall after Leonard Cohen died. I had never been drawn to The Sisters of Mercy, but as I listened to the words this autumn, I knew they would help me deal with this time of darkness in the world. So, I’ve learned the words and have begun doing some artwork related to the song. After doing several sketches, I finally arrived at one that I wanted to use.  As I  looked at the sketch, I could see it as a linocut and I decided to return to linocutting to create the image. I gave up linocutting around 20 years ago, though it was my favourite medium, because of repetitive strain from carving over the years. Now I considered the roving pain I have as an elder. And I thought, I already have pain, so I’m not going to be afraid of it. I’m going to return to printmaking–something I love dearly. I have found a soft lino substitute that can still have crisp lines cut into it. I’m experimenting with that and with working for shorter periods of time at a stretch. So far, this is working.

Here’s 2 photos of the carving in progress. I’m using carving tools really made for children, but that work fine! I’ll show you the print once I finish it.

Good holidays to you.

Oh the sisters of mercy, they are not departed or gone. They were waiting for me when I thought that I just can’t go on. And they brought me their comfort and later they brought me this song. Oh I hope you run into them, you who’ve been travelling so long.–Leonard Cohen 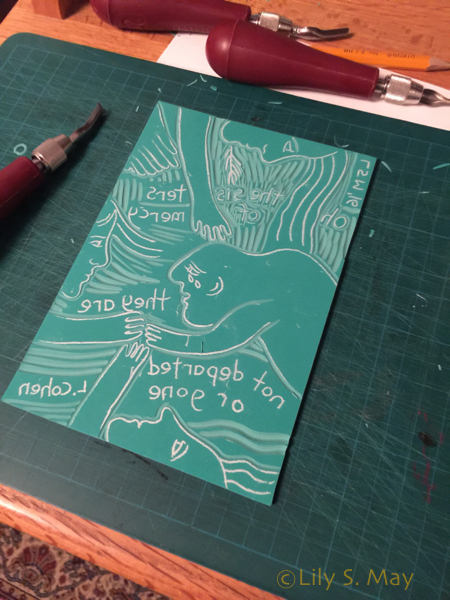 8 thoughts on “Lino and Leonard”